The drive to Yellowstone was a nice drive. Had great views and wide open valleys. We stopped by Wendy's for some lunch. We arrived to Yellowstone around 4 and found our campsite. We then sat down at the table and planed the next two days. Yellowstone is a massive park with many things to see. We camped in the Maddison campground, which was a great base camp because it is centrally located. We split the park into two different round trips. One for Monday and one for Tuesday. That night we made some delicious chili and lentils for dinner played some cards that I won and read before going to sleep.

The next day we started our north loop of the park. We stopped at several waterfalls along the drive. They were beautiful. The only problem was the amount of people.  It was insanely packed wherever we went. It was very aggravating. We then headed west and did a short one mile hike to wrath falls.  This was amazing because it was one of the few things to see that you actually had to hike to see, not just drive right up to it. We enjoyed this a lot because not only did we have to work to get the amazing view, there was maybe 10 people on the trail!!  This was such a relief and made us both extremely happy. We then drove to Mammoth Hot Springs. You would have thought that we were trying to find parking outside of a one direction concert.  Freaking ridiculous. We were both so discouraged by the touristy crap. We walked the springs along with about 200 other people.  Needless to say, I was grumpy and had a very hard time enjoying the sites. I could not believe how many stupid people I was surrounded by. People unaware of their surroundings, people not staying on paths or following the rules set up.  We left Mammoth and headed to Norris Geyser Basin. This was pretty neat too. We probably enjoyed this more than some of the other places. It was pretty well spread out so the over population was a little more bearable.

We then headed back to the campsite and enjoyed the peaceful evening. We discussed how disappointed we were in Yellowstone. We could not believe the amount of people, the lack of hiking trails and the whole tourist setup of the park.  You could not go 15 miles without seeing a gift shop the size of a Walmart and a restaurant that served five course meals. It was utterly ridiculous.  There were more hotels, shops, and restaurants than there were campsites. Brad described the park as the Disney World of National Parks. That was the perfect way to describe it.

The next day we were ready to do a south loop of the park. We stopped at Old Faithful first and had quite the touristy experience there.  It was painful. We waited about 20 minutes for the geyser to erupt. It was truly magnificent, but the large number of people around us really lessened the experience. We wished it would have been a situation were we could have hiked three miles to come to the amazing view we had. We wanted to work for it damn it!!!  We were so used to the previous parks that were amazing and we had to hike to get to the truly amazing parts.  Don't get me wrong,  all the stops in Yellowstone were Amazing, but it was like this ...  1. Drive to the site. 2. Drive around for 15 minutes to try and find a parking spot. 3. Walk a short distance to the sight. 4.  Wait for 40 people to take 16 pictures of their kid and husband and then linger in the way so no one else can see. 5. Finally see the waterfall/geyser/sight we wanted to see. 6. Go back to car and repeat.  Not what we particularly enjoy. On the south loop day, we had a beautiful drive along the lake.  We then ended up at the Mud Volcano area. This was the highlight of this day.  We walked though and saw the awesome geysers and mud pots. We saw a lot of bison while at this site too. They were so close to us. At one point there were people standing WAY too close to the buffalo and Brad and I thought we were going to see these people get mauled by a buffalo. Unfortunately, the people got smart and left the buffalo alone. We continued the walk and saw several more buffalo. On the way back to camp, we were stopped in weird traffic on the side of the road and realized that there was an elk to the left of us. It started running in our direction and down the side of the road.  We got a great view and great pictures of the huge moose. My first time seeing an elk or a buffalo.

We returned to camp and got a good nights sleep for the next day in Grand Tetons. 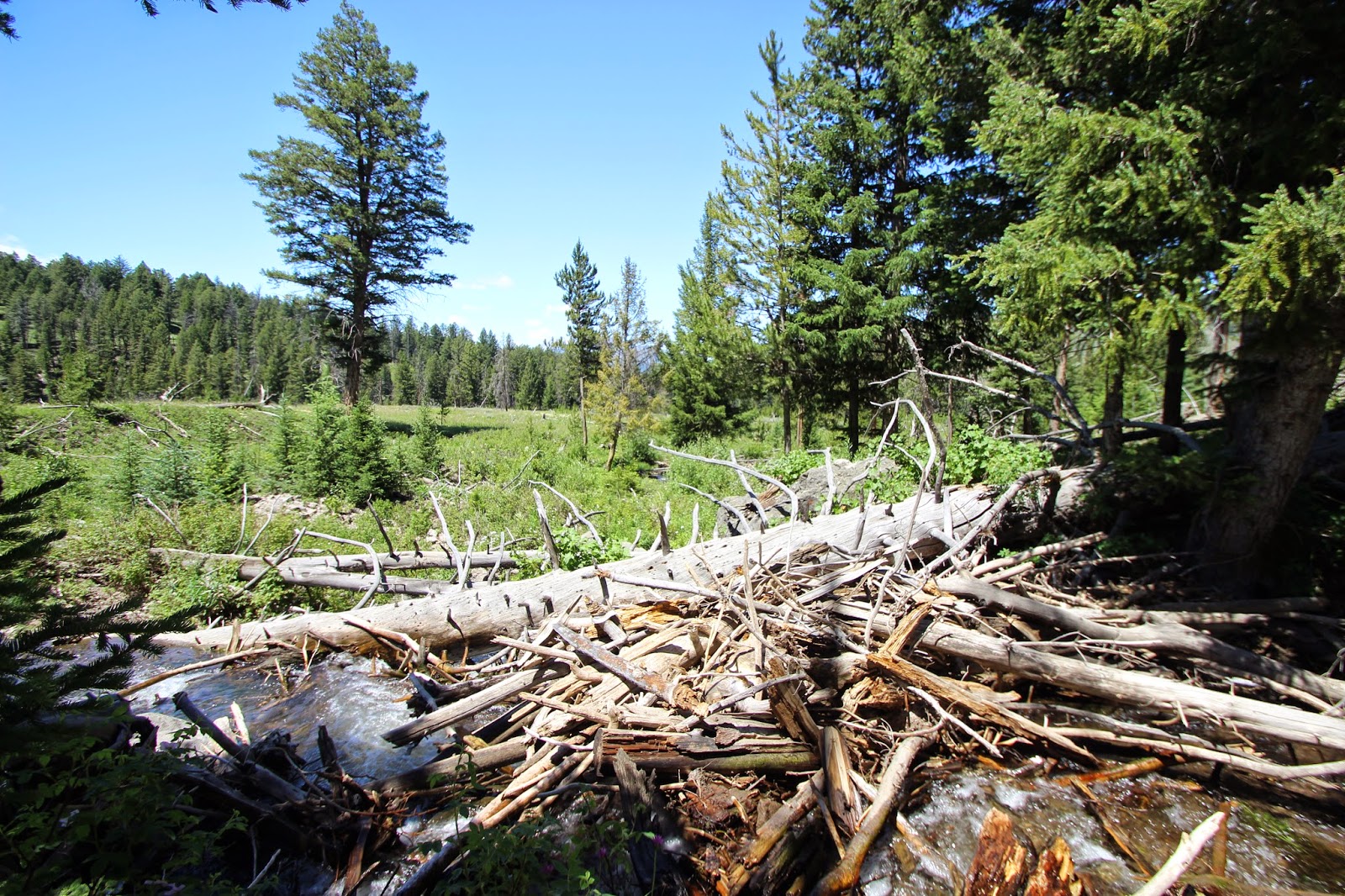 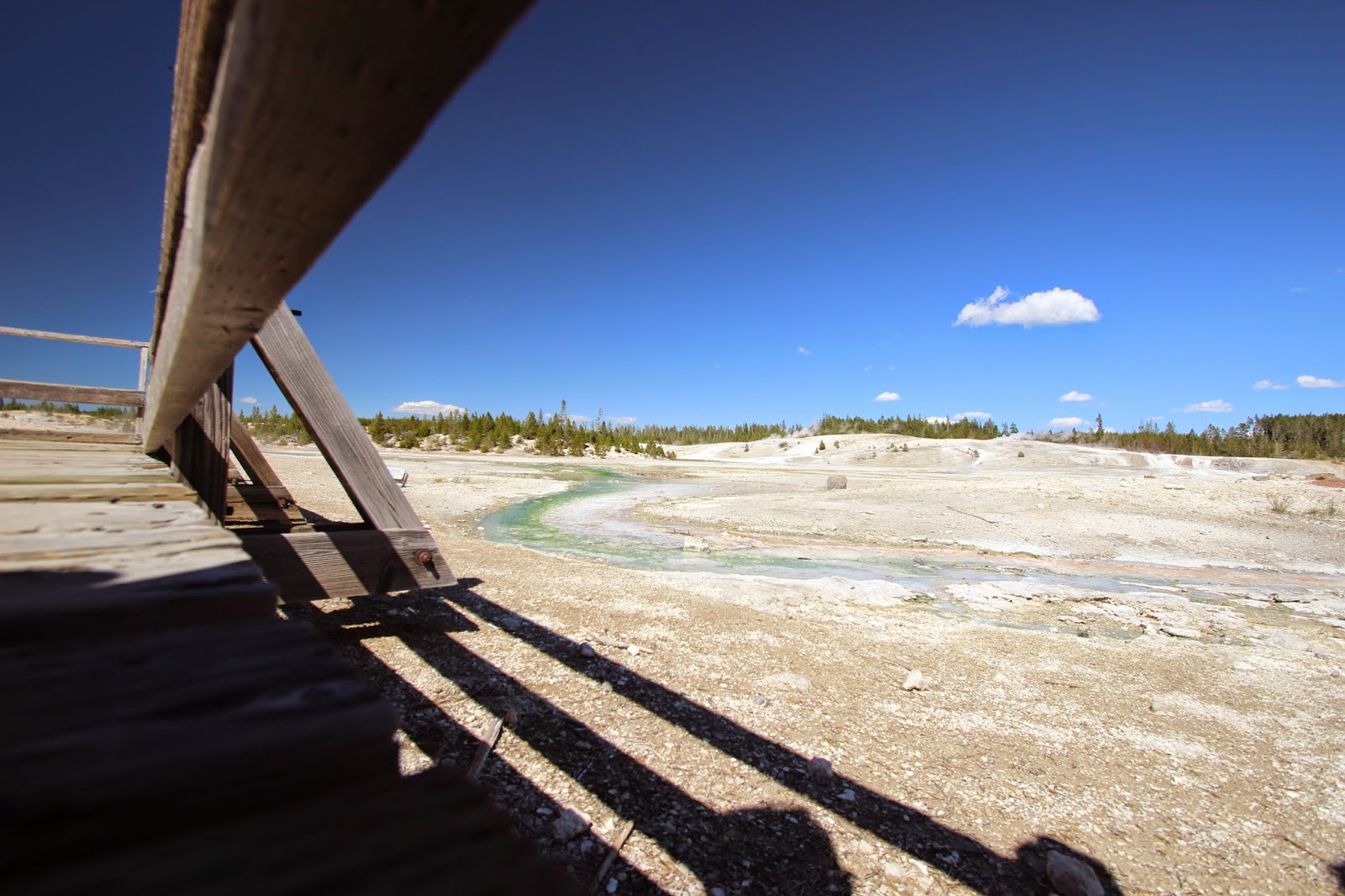 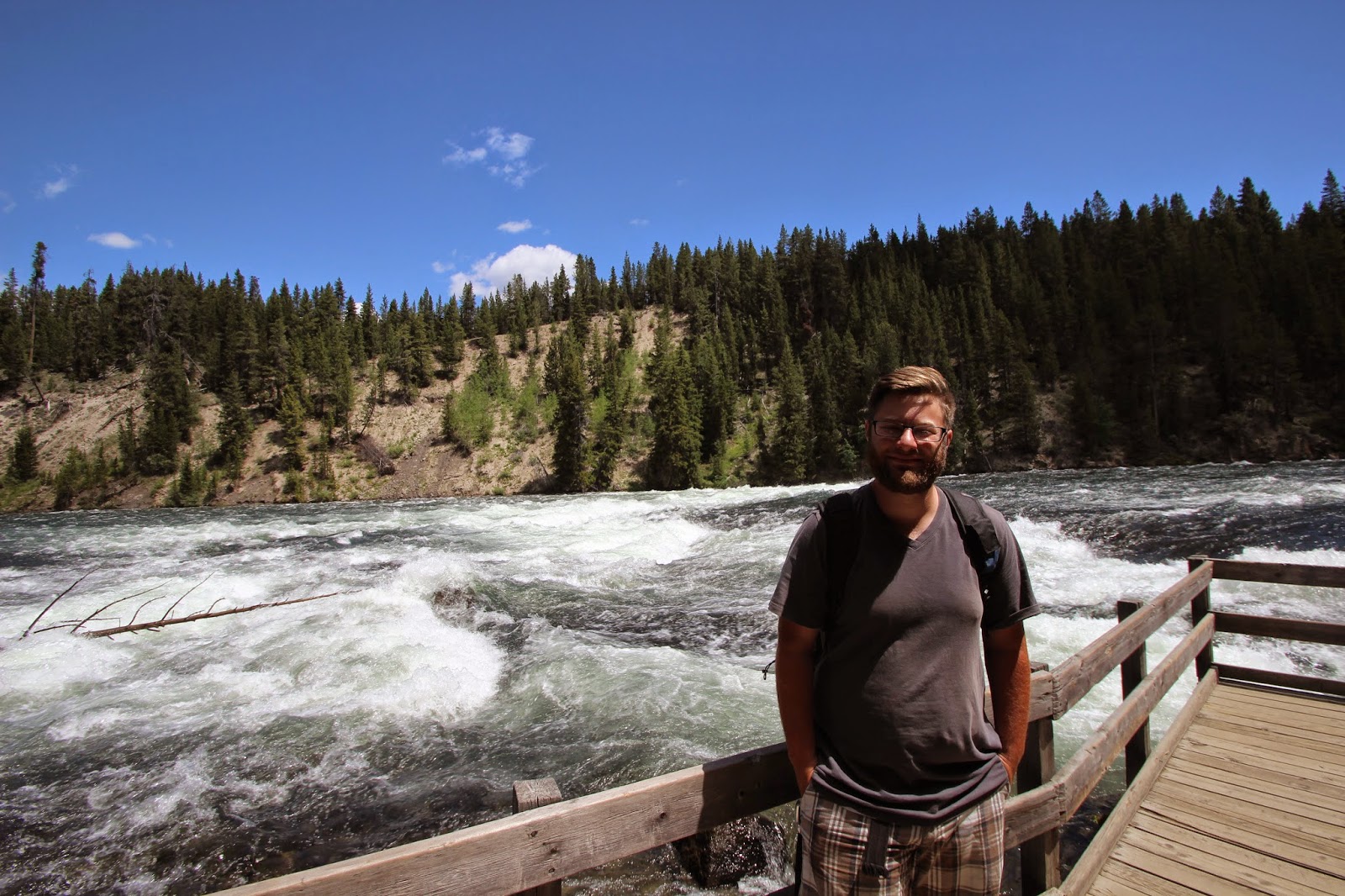 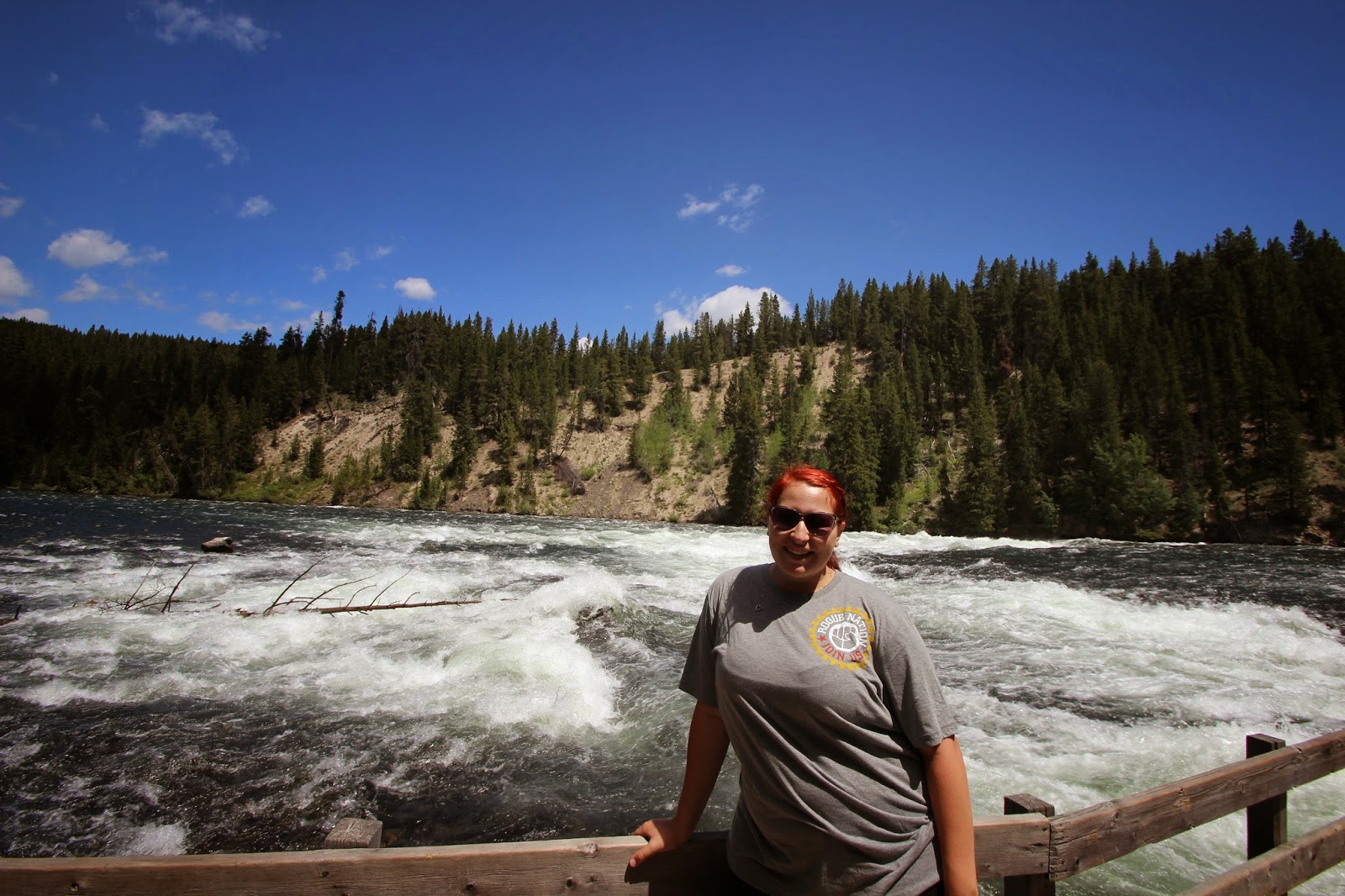 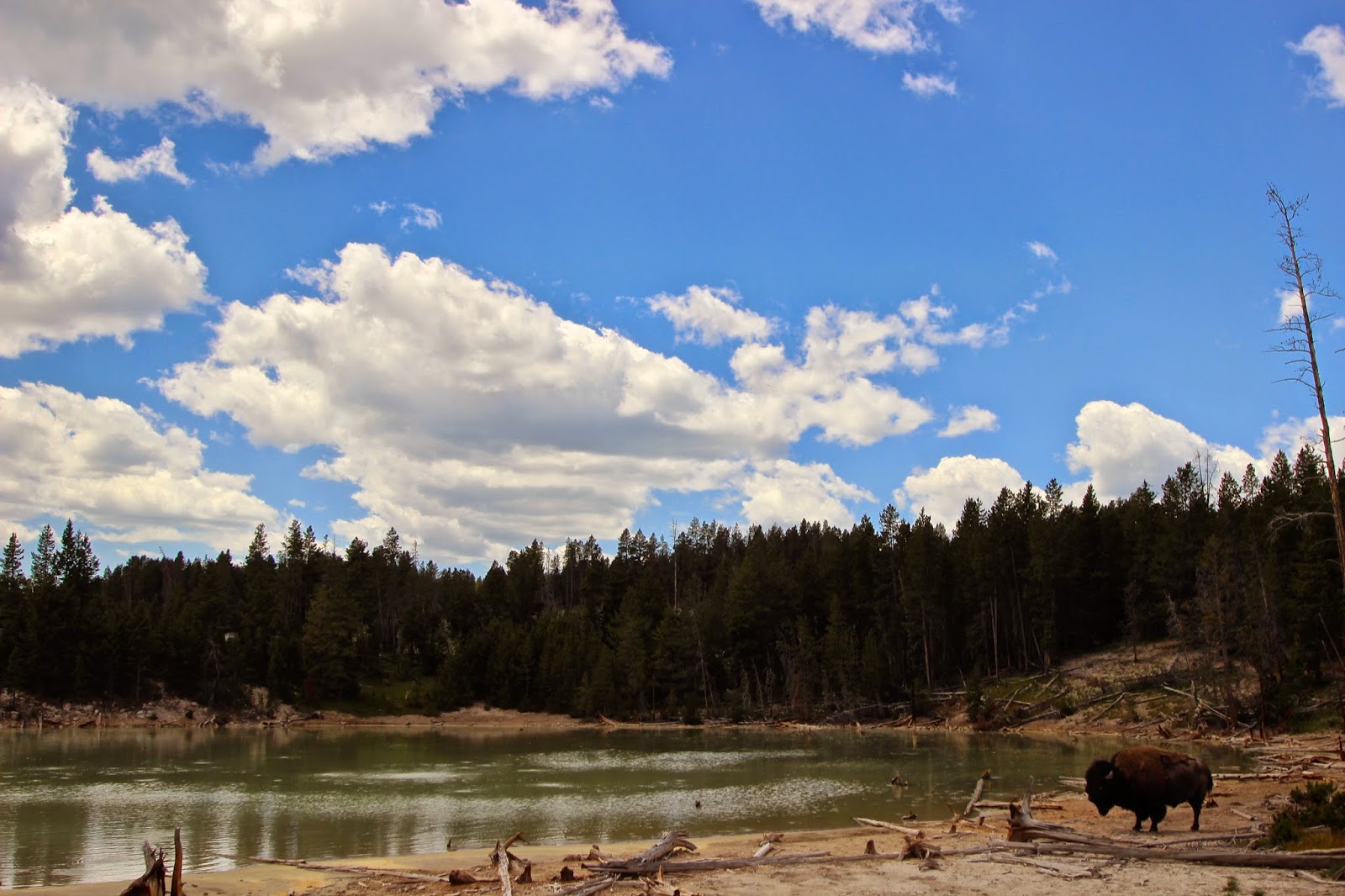 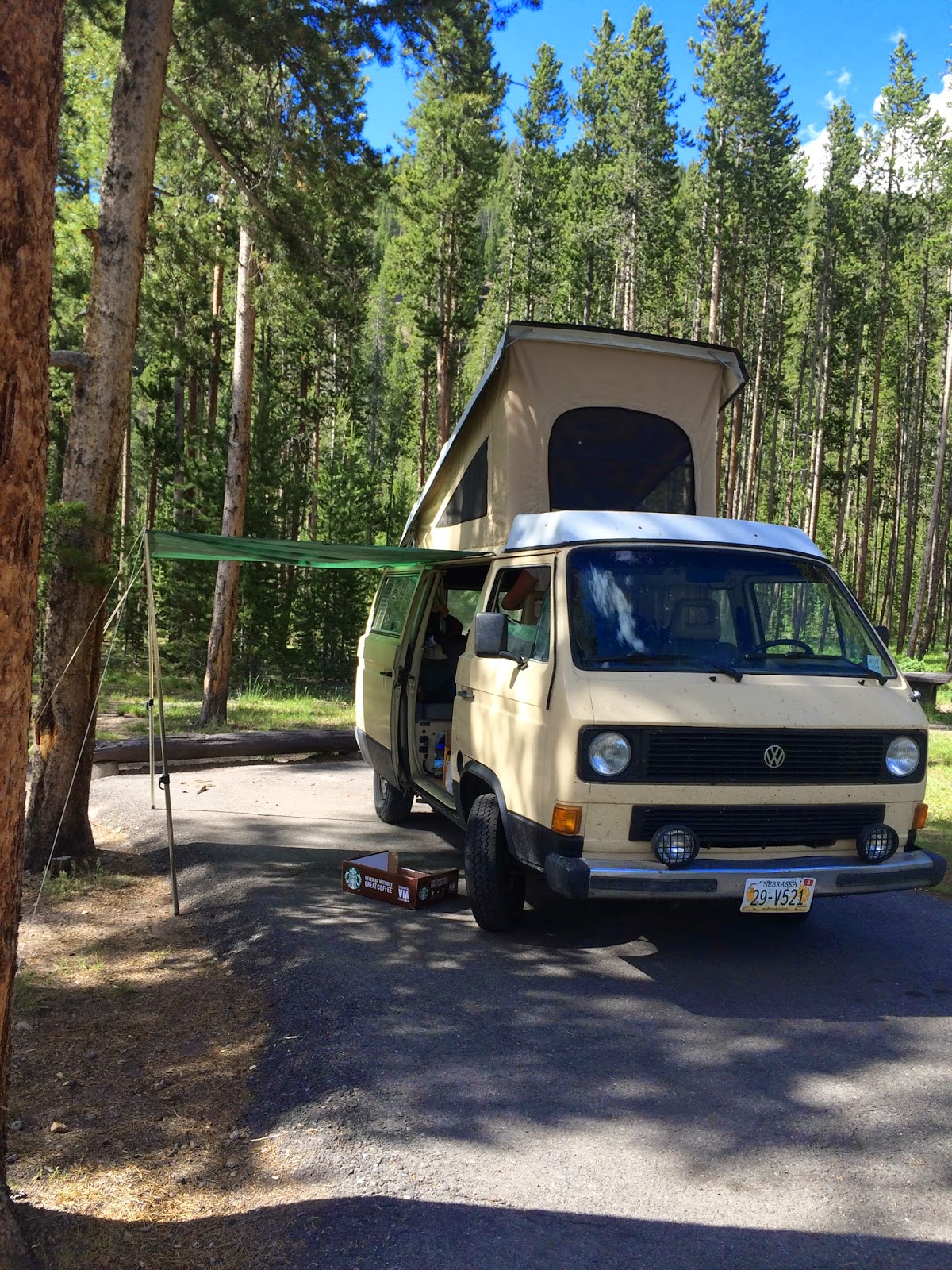 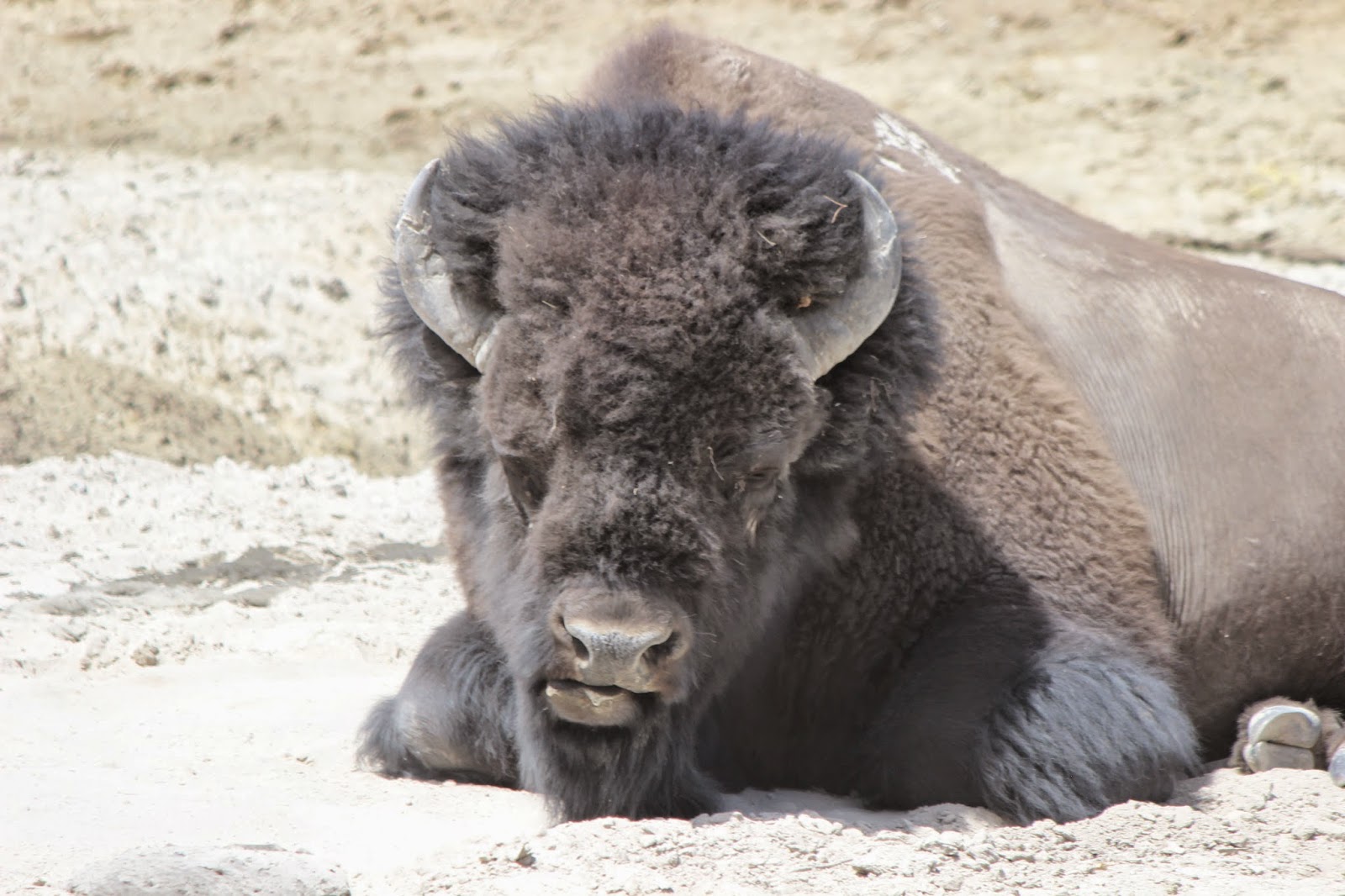 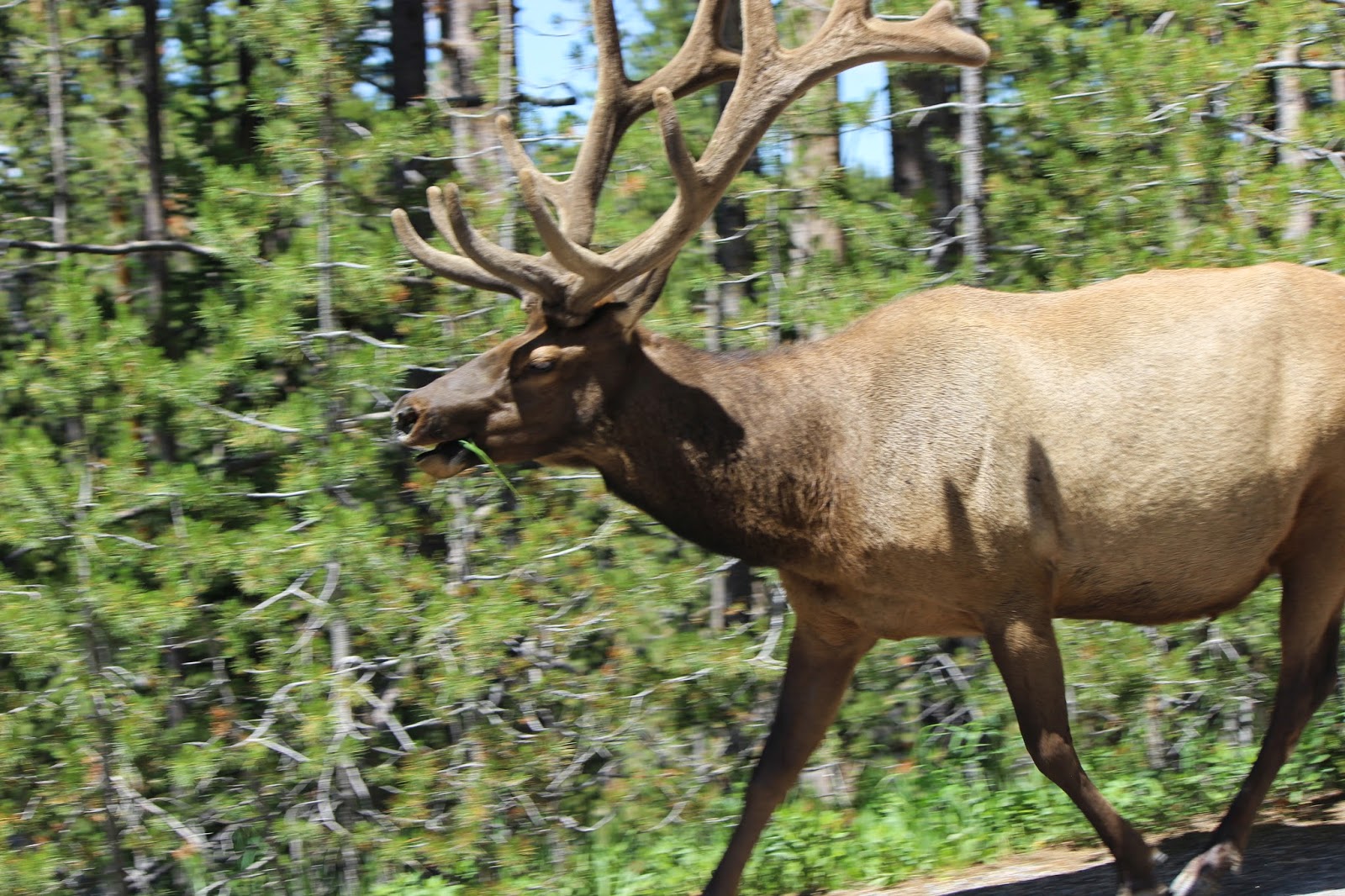 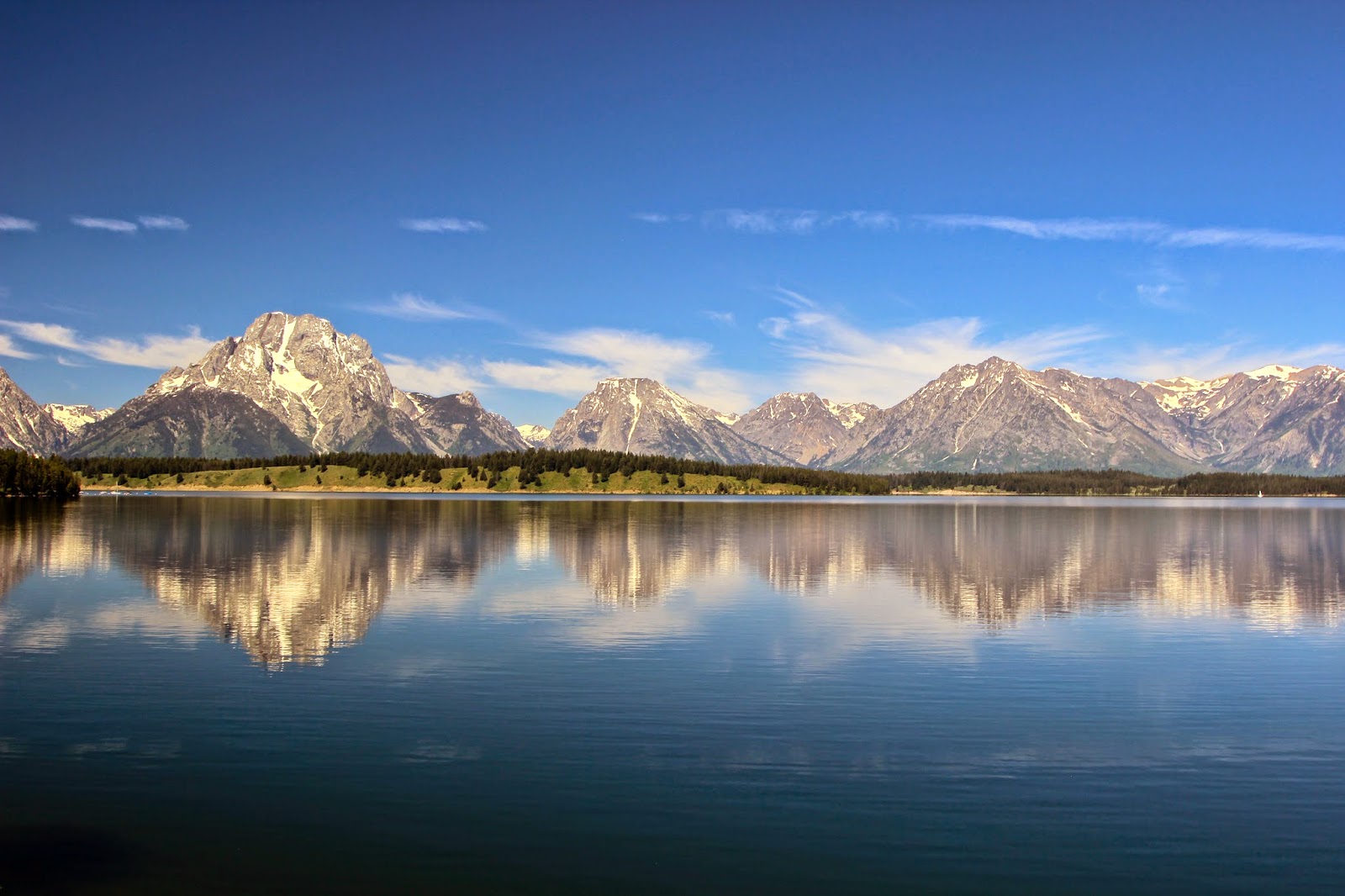 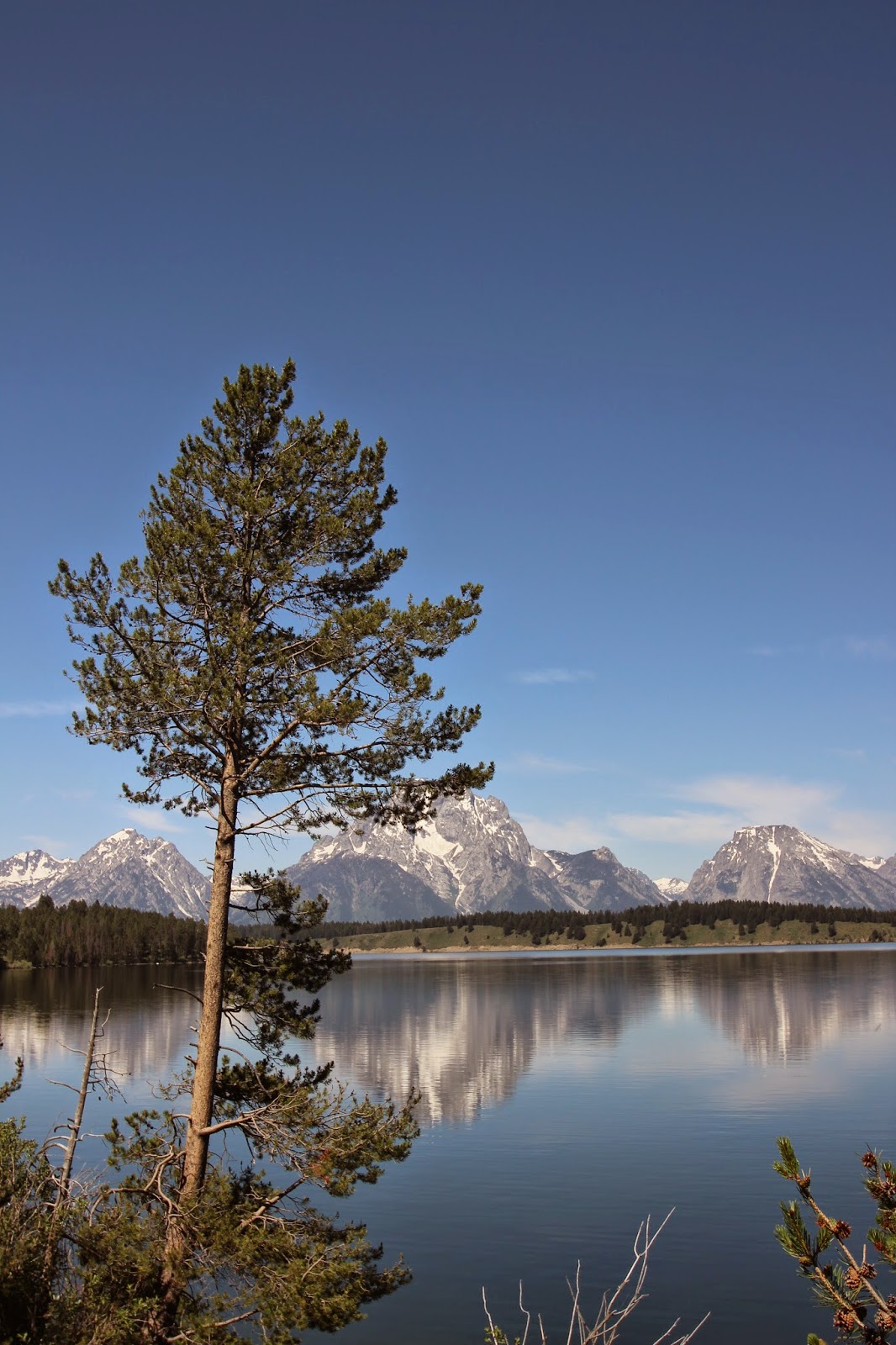