Sorry it took us so long to post.  We have been without service for SO long!  We almost forgot what wifi was :)

We made it to Lassen on the 27th kind of late in the day.  Lassen was a park that we were not sure what to expect.  We had not heard anything about it and were hoping to be surprised.  We arrived to a beautiful area with a huge volcano in the middle.  The volcano had erupted in 1914 and reduced the the size of the mountain and surrounding mountains tremendously.  They were still big mountains :)  We found our campsite which was located very close to a beautiful lake.  We set up camp and then took a little walk to the lake.  We sat next to the lake and enjoyed the beautiful view.  We were pretty tired from driving all day, so we sat by the lake for awhile and then planned for our next day.  We made dinner and played some cards and enjoyed the cool weather.

We had talked with a park ranger the day before, and she told us that if we do anything while we were in Lassen, that we had to hike to Bumpass Hell.  She described Bumpass Hell as something straight out of a sci-fi movie.  It is the largest hydro thermal area in the park and was something a lot people had never seen before.  She said there were boiling pots of mud and that is when our minds were made up.  We HAD TO go there.

We woke up, had some breakfast and headed out for the Bumpass Hell trail.  We drove for a little bit to get to the trailhead.  We had to hike quite a ways up and then straight down to get to the sci-fi scene.  The hike was not terrible, but it was a little difficult. 3 miles.  We made it to a point on the trail and saw a lot of steam rising into the air.  We got pretty excited at this point.  We almost ran down the rest of the trail.  Then we saw it.  There were several high velocity steam jets that reach 322 degrees.  It is the hottest fumaroles in the world.  There were also several boiling mud puddles that were so neat.  Neither of us had seen anything like it!!  The odor of rotten eggs was everywhere but we could have cared less.  The sites were pretty amazing.  We walked along the board walks and saw all the neat spots.  We then took a trail a little farther out to get to a really cool overlook over Bumpass Hell.  It was awesome to see all of it together from afar.

We started our slightly hard hike back to the car and took in the not so weird views on the way.  We truly enjoyed this hike and attraction!

We headed back to camp and relaxed for a bit.  We later made dinner.  We finally had HOBO POTATOES!  I had been waiting for a great camping meal like this.  I cut up the meat, peppers, and potatoes while Brad got the fire ready.  We enjoyed a huge, delicious meal and enjoyed the evening.

Lassen turned out to be super cool and one of our favorite spots!  Who would have thought! 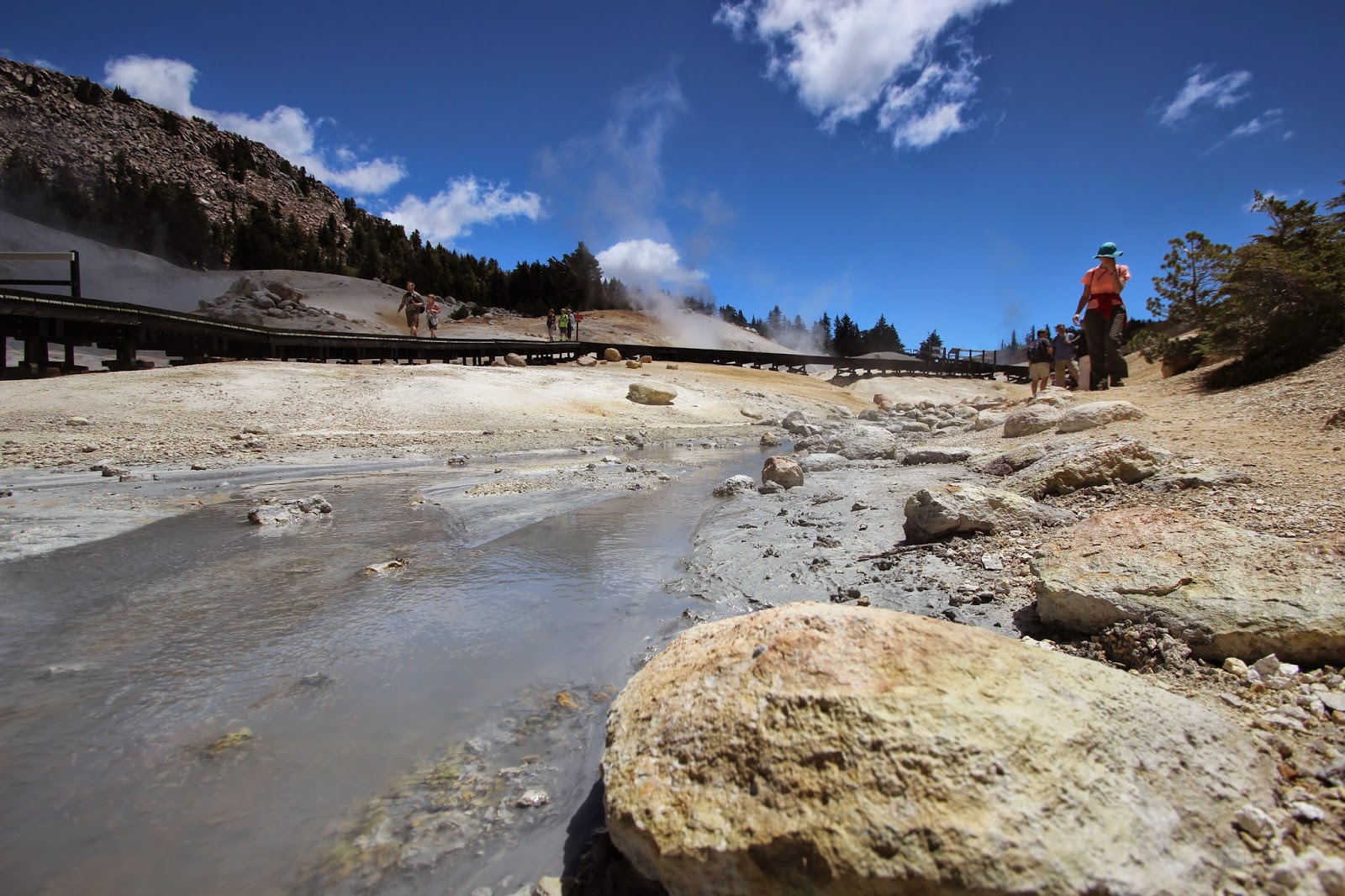 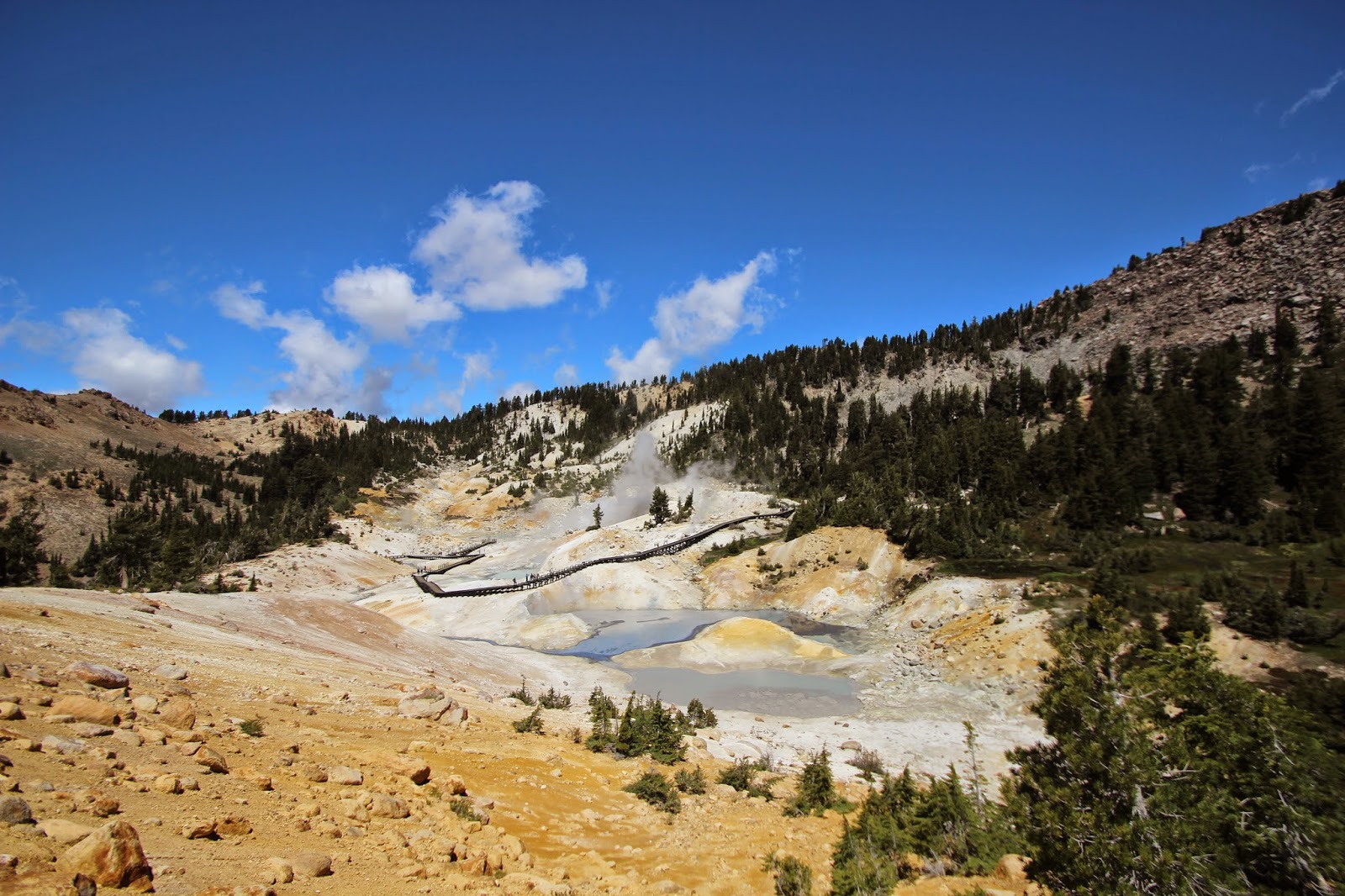 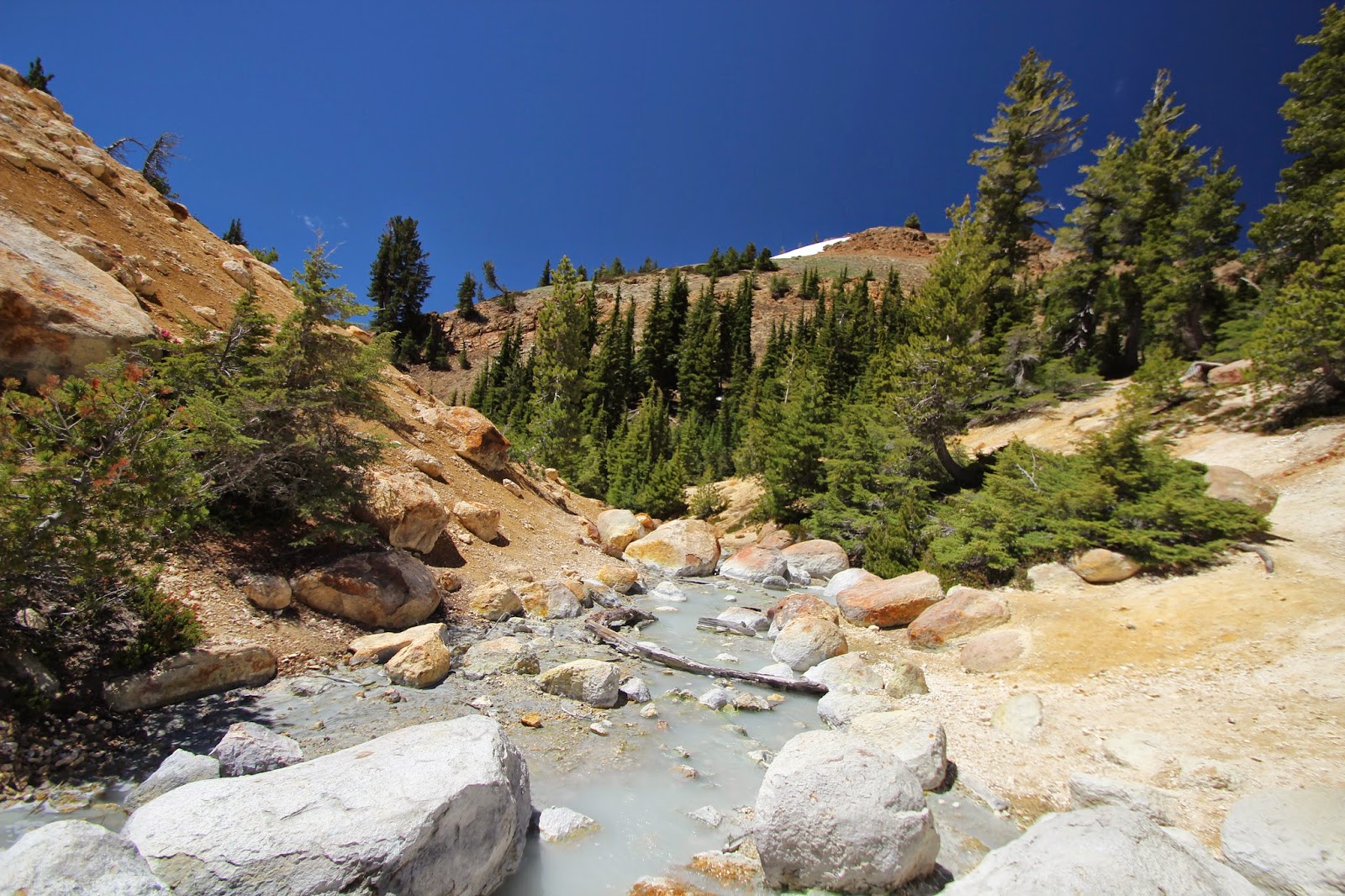 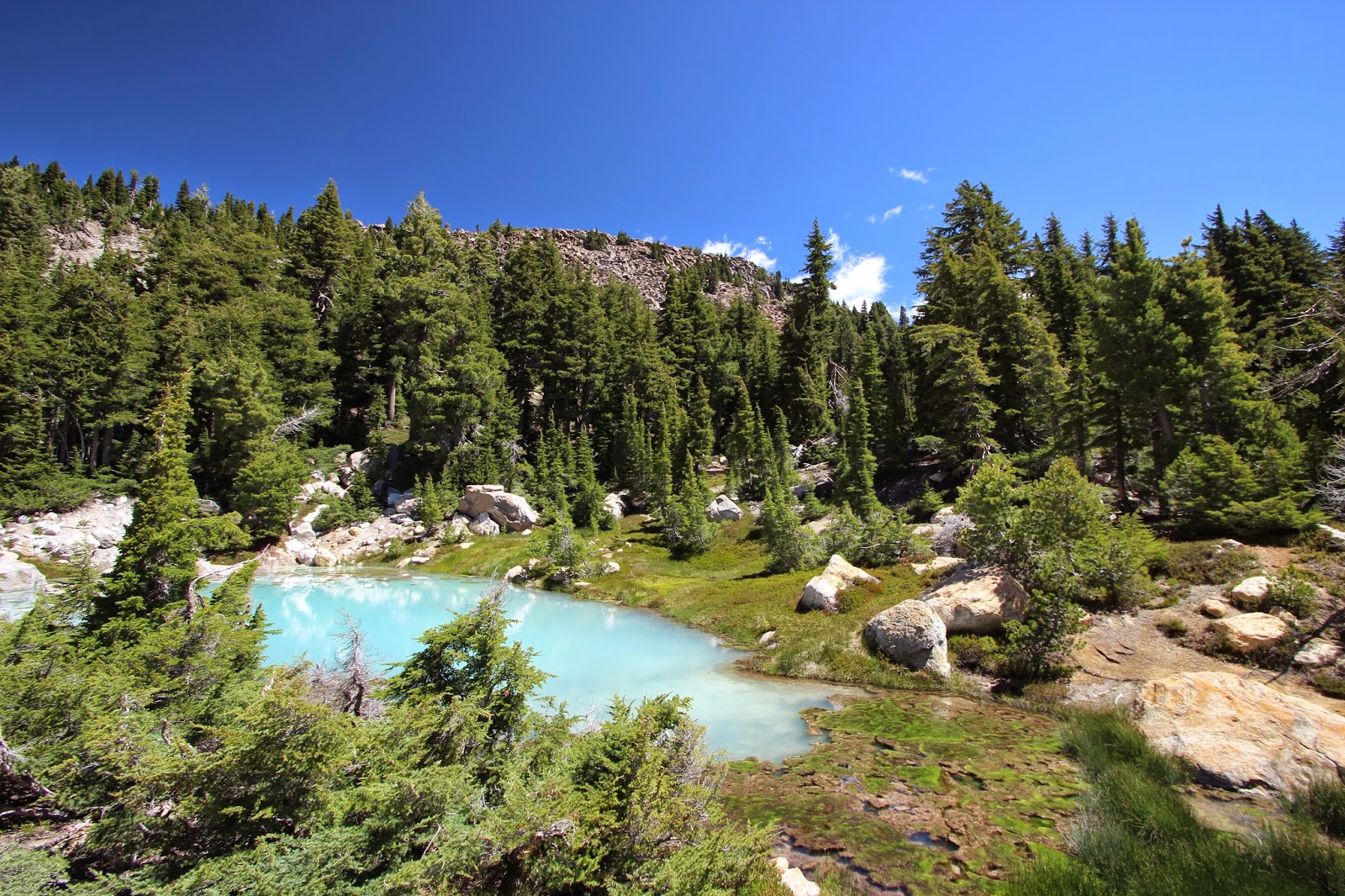 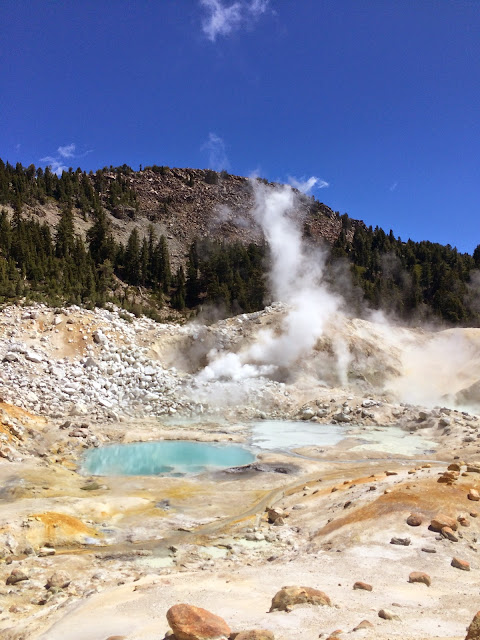 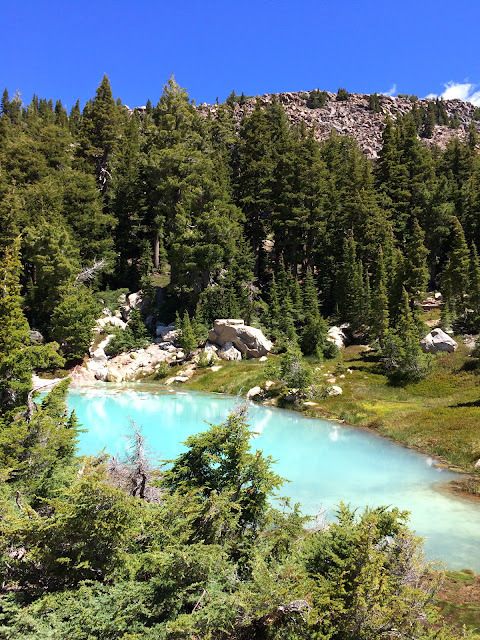 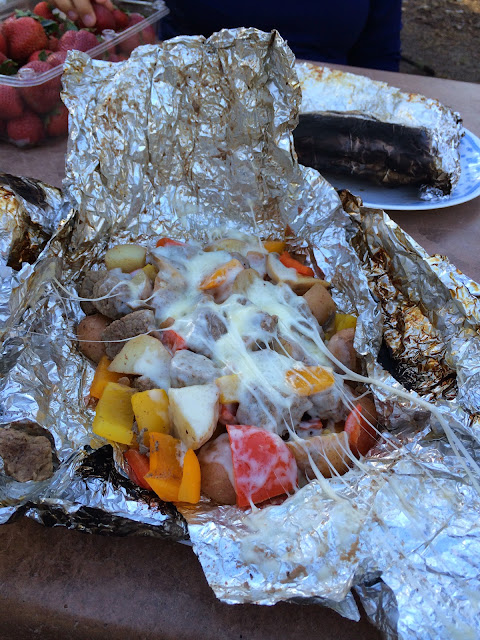